All the living room's a stage: PATRICK MARMION dips his toe in immersive online theatre

Audience participation. Two words that used to strike terror into the hearts of theatregoers and make them long to cower beneath their velvet seats


Audience participation. Two words that used to strike terror into the hearts of theatregoers and make them long to cower beneath their velvet seats.

Happily, there is little to fear from the virtual equivalent and the explosion of so-called ‘immersive online theatre’.

These are shows, led by actors in videos and voiceovers, in which friends and families can get together across continents — or even within their own home — to solve international conspiracies, defy scheming megalomaniacs or simply solve a homicide.

If you have any doubts about being able to navigate the technical challenges of such games, I recommend you summon a child; either in the flesh or via social media. Luckily, I am blessed by having two such creatures (aged 11 and 16) on call, both of whom make me feel like the digital equivalent of Fred Flintstone. 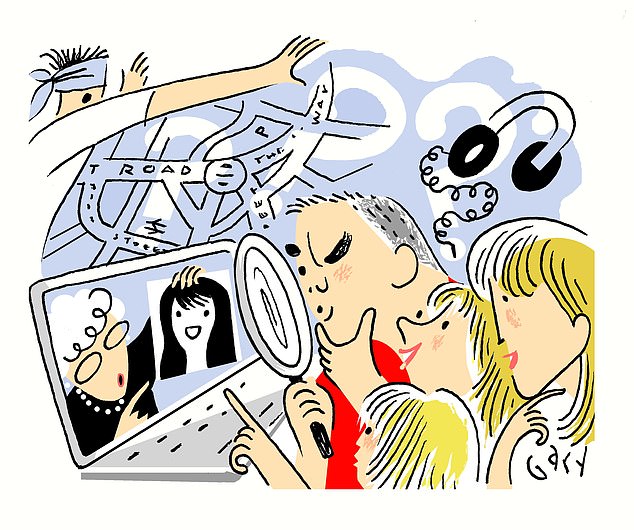 Happily, there is little to fear from the virtual equivalent and the explosion of so-called ‘immersive online theatre’

Plymouth Point (plymouthpoint.co.uk, from £45 per team)

They certainly set me straight in Plymouth Point, with repeated cries of: ‘No, Dad! It’s the other tab!’

This particular online thriller, which took our family around 90 minutes to complete, is a marathon of virtual sleuthing that starts with an elderly lady asking for help in tracing a young woman who’s disappeared.

Designed for two to six players, you hack emails, uncover subterfuge in international finance, plunge into 17th and 21st-century conspiracies, rummage around YouTube, phone a dead drop number and study Google Street View, before returning to base for a sinister twist.

And it’s just the first of a trilogy in this saga, with The Mermaid’s Tongue (tougher still; we took two hours) and The Kindling Hour (out today) to follow.

I had to agree with my 11-year-old, when she said it was ‘quite hard’. And there is a good deal of code-cracking and lateral thinking involved.

There were times, I must confess, when I couldn’t remember what we were trying to solve; why; how; or indeed the difference between my derriere and my elbow.

But, thanks to clues and nudges from the (very helpful) host, we got there in the end. A bit like completing a cryptic crossword (not that I ever have), it left us feeling oddly invigorated.

If, however, there’s nothing you long for more than to escape the tyranny of screens, try Undercover. This is a game for up to six people, which must be played blindfolded, and ideally wearing headphones (your own!).

Players should be in different rooms (or countries) to avoid feedback on the Zoom call.

Led by a digital compere called Morpheus, you are an MI6 agent who has been helicoptered into Dubai on a mission to expose a rogue scientist.

Working as a team, you must decide which doors to open, which tunnels to take and how to skip past security staff.

It’s all in your imagination and gets quite vivid — Mission Impossible meets Alice In Wonderland.

And though engaging, it is more whimsical than heart-pounding.

Pioneered at a Moscow theatre in 2018, the adult version, Locked Down, is a darker, dystopian adventure (including trigger warnings), while the lighter kids’ version, Spymaker, could suit children’s parties. (Both are available now online.)

The Verona Lounge, is a 1950s murder mystery set in a Soho dive.

Our job is to grill suspects (played by actors) implicated in the killing of double-dealing showgirl Olive.

Each of them subtly steers us in the right direction, and keeps the action ticking over nicely for about 90 minutes. So, basically, it’s Cluedo, in a nightclub, with a set of low-lifes. Terrific fun!

And if that whets your appetite, look out for Sherlock Holmes Immersive (sherlock immersive.com, from £15 per person; out later this month), which gives you 75 minutes to solve the case of three murdered MPs . . . before the killer strikes again. It’s chillingly subtitled The Case Of The Hung Parliament.

Shaken up by this tale of youth crime 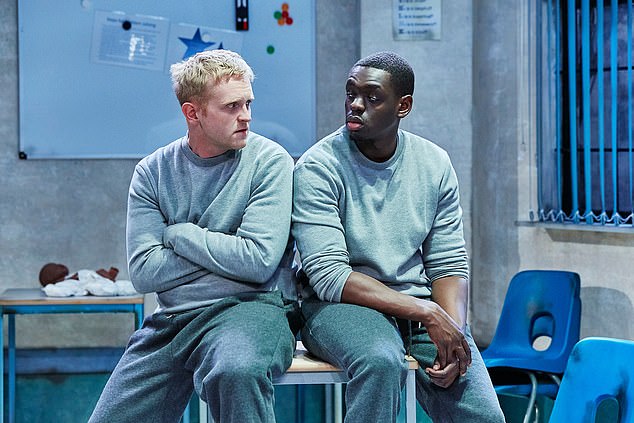 Following three young offenders who are due to become fathers, it’s an unflinching look at life inside for those with a disturbed past and little future

Samuel Bailey’s tough debut play about young offenders won him the prestigious Papatango Prize for new writers in 2019 and was heading for a West End transfer last year.

It’s a piece of old-school social realism in the vein of the 1979 borstal drama Scum, which launched Ray Winstone.

Following three young offenders who are due to become fathers, it’s an unflinching look at life inside for those with a disturbed past and little future.

The language runs a four-letter gamut, but as well as a fine ear for expletives, Bailey has a great gift for characters whom we come to love.

Josh Finan is dizzying as the motormouth, self-mythologising Scouser who dismisses history as ‘something really boring that happened to someone really ugly years and years ago’, while Ivan Oyik is a cool, streetwise kid with ambitions to become an accountant.

But Josef Davies is a heartbreaker as a quiet stutterer who’s in for a crime that shocks even the other two. It sure left me shaken and stirred.

Pelicans' Zion Williamson believes he could have made the NFL: 'I'm just a competitor' 0