Alex Trebek gets loving tribute from his daughter, 54, on the three-month anniversary of his death


Alex Trebek’s daughter Nicky paid loving tribute to the TV star on Instagram this Tuesday three months after his death.

The Jeopardy! host passed away last November at the age of 80 less than two years after announcing he had stage four pancreatic cancer.

Now his 54-year-old daughter posted an Instagram picture of Alex on the show pointing up to the screen with both hands. She also shared a sweet memory in the caption. 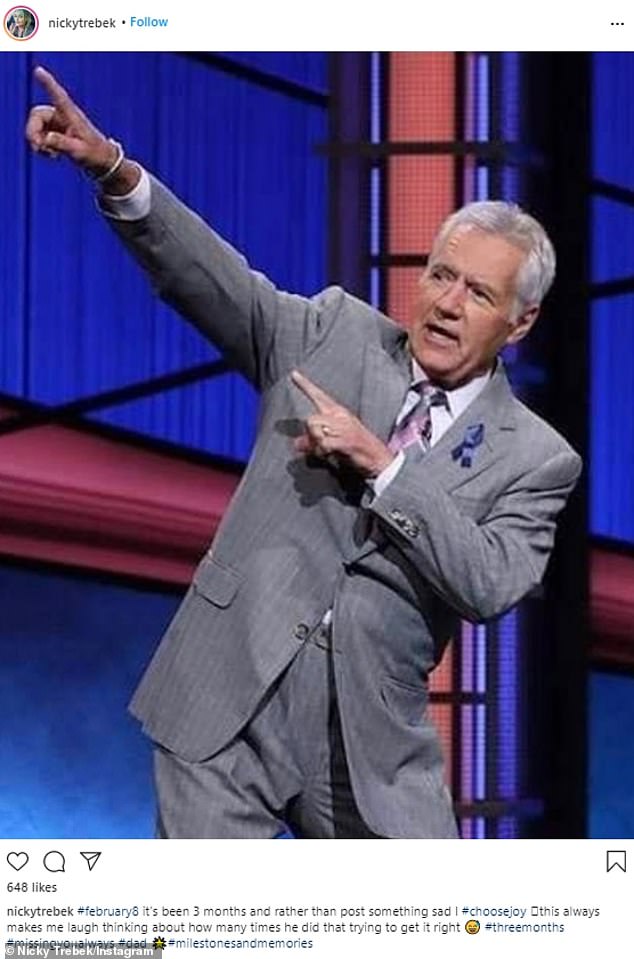 ‘Rather than post something sad I #choosejoy’: Alex Trebek’s daughter Nicky paid loving tribute to him on Instagram this Tuesday three months after his death

Nicky wrote: ‘#february8 it’s been 3 months and rather than post something sad I #choosejoy this always makes me laugh thinking about how many times he did that trying to get it right,’ adding a smiling emoji with a bead of sweat.

She popped on some hashtags at the end of her post as well; one read ‘missing you always.’

However after Elaine married Alex in 1974 he adopted Nicky and gave her his surname, remaining close with her even after the divorce in 1981. 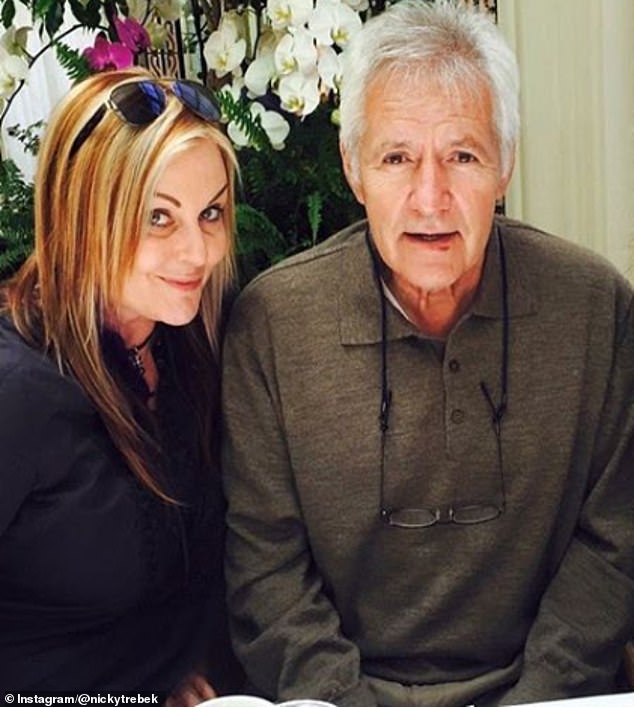 Doting dad: Alex, who adopted Nicky after marrying her mother Elaine Trebek Carres in 1974, is pictured with his eldest daughter last summer

At the time that Elaine and Alex split up his career was not going particularly well, and then at the dawn of 1982 he lost his father to cancer.

‘I recall resting in bed with some Colonel Sanders chicken sitting on a plate on my chest and a bottle of white wine in my hand and the television set over there. I spent a lot of evenings that way,’ he said, according to his biographer Lisa Rogak.

Two years after his father died Jeopardy! was revived and Alex was brought on as host, a role he stuck to for a record-breaking over 8,000 episodes.

While he was on the show he met Jean Currivan, a project manager at a property development company, and they married in 1990. 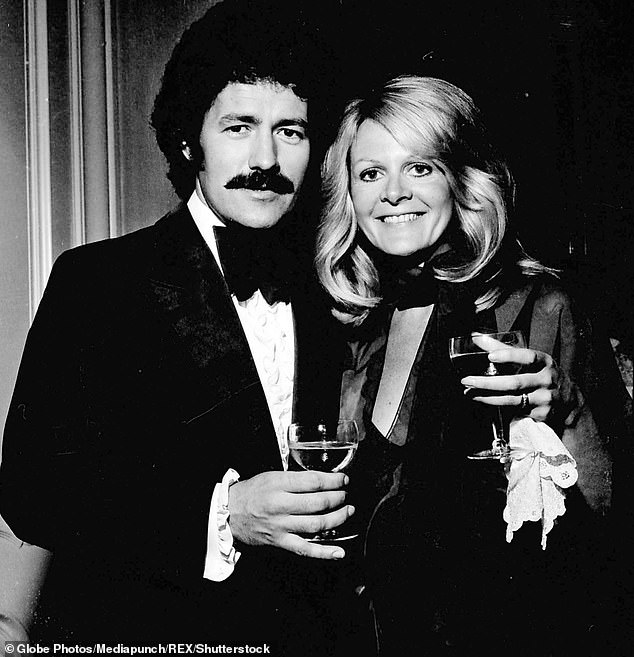 The way they were: Alex and Elaine are pictured together during their marriage which lasted from 1974 until their divorce in 1981

Jean and Alex remained together for the rest of his life and they welcomed two children – Matthew, 31, and Emily, 28.

‘Now, just like 50,000 other people in the United States each year, this week I was diagnosed with stage four pancreatic cancer,’ he stoically announced on the air during an episode of Jeopardy! in March 2019.

‘Now normally the prognosis for this is not very encouraging, but I’m gonna fight this and I’m gonna keep working,’ said Alex.

‘And with the love and support of my friends, and with the help of your prayers also, I plan to beat the low survival rate statistics for this disease.’ 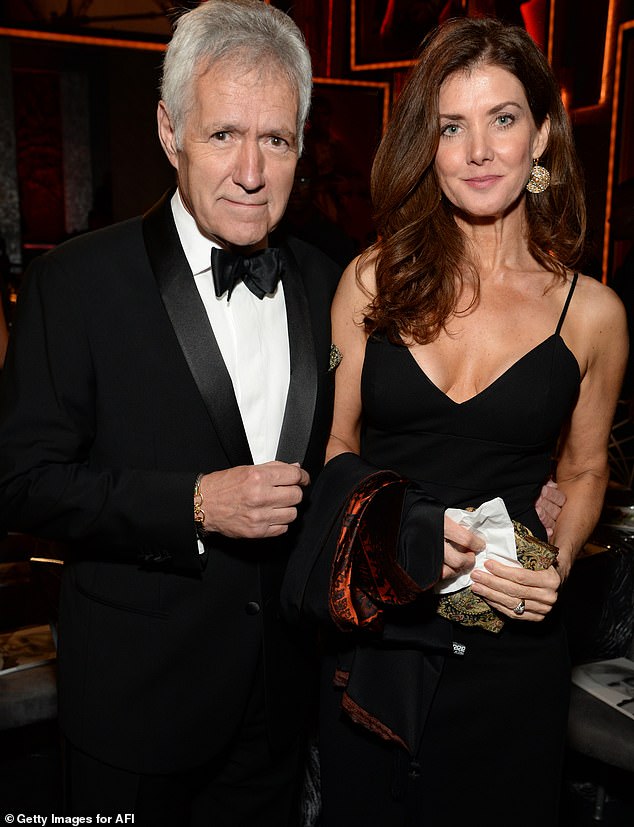 Side by side: Alex is pictured with his widow Jean Currivan, who married him in 1990 and had two children with him, Matthew, 31, and Emily, 28

He quipped: ‘Truth told, I have to, because under the terms of my contract I have to host Jeopardy! for three more years!’

Even after announcing his diagnosis he remained on the job at Jeopardy! taping the show until 10 days prior to his death.

In fact he was such a trouper that the last episodes he filmed did not even conclude airing until January 8, two months to the day after he succumbed to cancer. 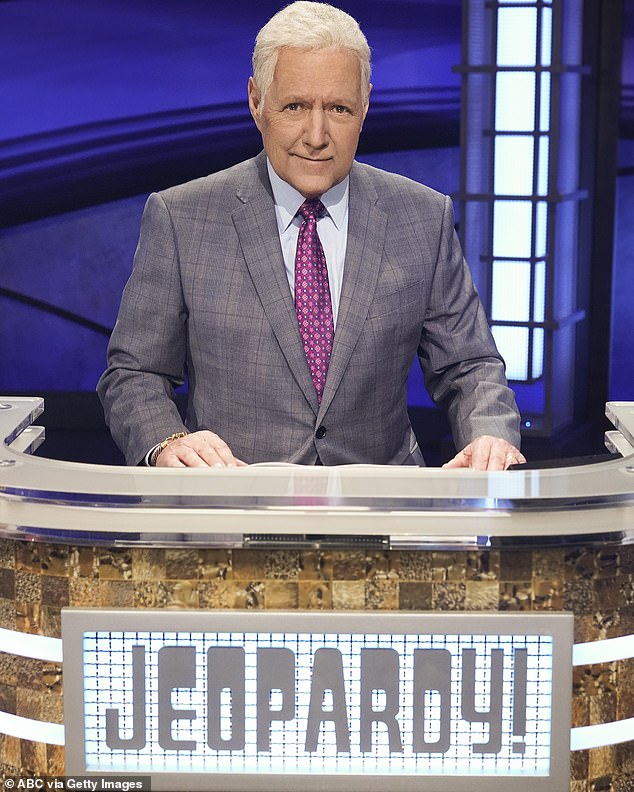 Trouper: Even after announcing his cancer diagnosis in March 2019 he remained on the job at Jeopardy! taping the show until 10 days prior to his death; pictured December 2019

Jeopardy! executive producer Mike Richards spoke to Entertainment Weekly just before Alex’ last episodes went on the air and shed some light on the tapings.

‘I talked to him seven days before what would end up being his final taping session, and I said: “Alex, you’re barely up and around. We have a long way to go before you’re gonna be back in the studio taping,”‘ Mike recalled.

‘He got very firm, which I loved, and he goes: “I’ll be there. Don’t you cancel anything.” And sure as heck, he was. He was a warrior.’

Looking to get outdoors this weekend? National parks are free on Saturday