A joke telling cleaning robot is being rolled out to hospital wards in a bid to ‘put a smile on patients’ faces’ and help in the fight against the deadly coronavirus.

Autonomous bot Ella, built by LionsBot, has already proved her worth during a demo at Tunbridge Wells Hospital in Kent where she kept the reception ‘spick and span’.

As a result of the successful demo, Maidstone and Tunbridge Wells NHS Trust expressed an interest in leasing two of the gadgets for use on a paediatric ward.

She interacts with anyone she comes into contact with on the wards by telling ‘hilarious gags and even singing’, according to LionsBot.

The trust say they will use the robots in hospital reception areas to mop the large floors and free up human cleaners to focus on potential Covid-19 touch points. 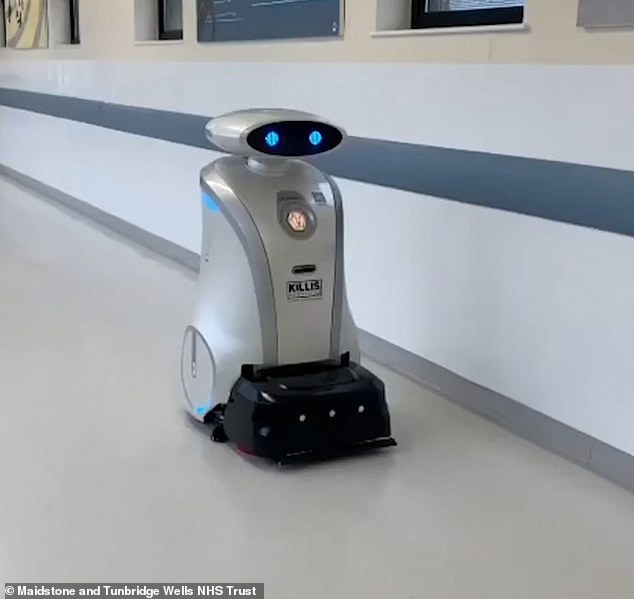 Autonomous bot Ella, built by LionsBot, has already proved her worth during a demo at Tunbridge Wells Hospital in Kent where she kept the reception ‘spick and span’

Launched in April 2020, Ella is a scrubbing and disinfecting robot.

She is also able to interact with people by telling jokes and singing.

Built by Singapore tech firm LionsBot, Ella is one of 16 models.

She comes packed with integrated sensors to detect and avoid obstacles.

The robot is able to navigate around areas at speed, while also cleaning and disinfecting floors she crosses.

She can put herself on charge at the end of a shift or when work is done.

Ella took part in a demonstration on Tuesday to see how she would fit in to her new surroundings – it saw her roam the paediatric Hedgehog Ward at Tunbridge Wells Hospital in Pembury, Kent – leaving the children amused.

She left young patient Jimmy Edwards, nine, with a big grin after cracking the joke: ‘How do trees access the internet? They log on’.

The robot’s blue LED eyes even begin to squint and her head begins to wobble to mimic laughing as a playful giggle echoes out of its speaker system.

In a separate visit to Maidstone Hospital, Kent on Friday January 22, Ella was filmed quipping: ‘The earth’s rotation really makes my day.’

The NHS Trust is hoping to have a cleaning robot in each of its two hospitals in the near future to clean the floor of the main reception areas.

Having Ella do the flooring means it dries quicker and frees up cleaners to sanitise touch points – vital in stopping the spread of Covid-19.

The bots will then be deployed to the children’s wards in the summer months when strain is expected to ease so they can entertain poorly kids.

The Trust’s Assistant General Manager for Facilities Sarah Gray said Ella ‘put a smile on the faces of some of our youngest patients’ when she visited the ward.

‘The Trust is currently looking at leasing the robots which will help free up our domestic cleaners,’ Gray explained. 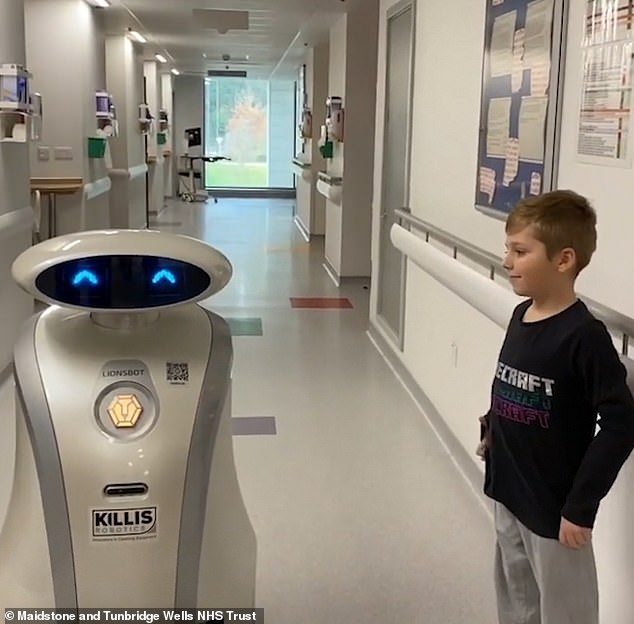 She left young patient Jimmy Edwards (pictured), nine, with a big grin after cracking the joke: ‘How do trees access the internet? They log on’

She said they ‘currently spend a lot of time mopping the large floor space on a regular basis – especially during the winter months – so they can carry out vital touch point cleaning around the two sites which is essential during the pandemic.

‘As the robots interact with anyone they come in to contact with, the plan is to redeploy them during the summer months to the children’s wards so children and young people can enjoy them.’

LionsBot have four different LeoBot families – a scrubbing expert, a vacuum genius, a silent mopper and a small but strong worker which can pull a whopping 450kg.

The 16 various models are packed with well-integrated sensors to detect and avoid obstacles while nimbly navigating areas at speed.

They are controlled by a special smart phone app with pre-set cleaning modes and can be hooked up together to efficiently work simultaneously.

Once they’ve completed their assigned duties, the smart bots self-dock and auto charge so they are ready for their next shift.

The Singapore automation company says on its website: ‘Created to be engaging, LionsBot cleaning robots are injected with personalities via their emotional responses, such as through their expressive eyes and voices.

‘Our humanised robots also embody Singaporean traits; for instance, friendliness, diligence and efficiency which are reflected via the interactive features and high productivity.’

HOW CAN POPULAR ROBOTS BE HACKED? 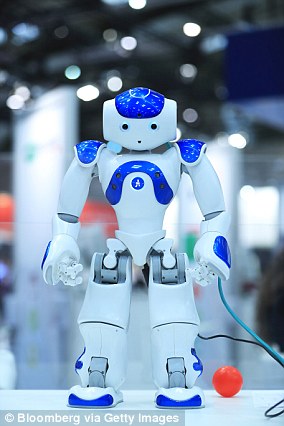 In a 2017 study, Seattle-based research firm IOActive found robots from SoftBank like NAO (pictured) were susceptible to more than 50 vulnerabilities

Overall, these vulnerabilities lead to a plethora of dangers, including the possibility they could be hijacked and used as secretive listening devices or even weapons.

‘In the very near future robots will be everywhere, on military missions, performing surgery, building skyscrapers, assisting customers at stores, as healthcare attendants, as business assistants, and interacting closely with our families in a myriad of ways,’ the research paper, titled ‘Hacking Robots Before Skynet,’ noted.